The Biggest Little Western Store where the Cowboys bring their family to Shop. The most Unique building in the Center of the Nation.

They have provided the area with Western Wear needs including Custom Shaped Hats, Boots, Clothing for Men, Women, and Children, Tuxedo rentals, even printing T-shirts, caps, and Jackets. In 2014 Pete’s Clothing received the Windy Ryon Resistol Retailer of the Year Award.

The History of Pete’s Clothing is quite unique, In 1946 Leonard and Ruth Hodge moved from the homestead in the Slim Buttes of Harding County in Northwest South Dakota to Belle Fourche to start the Hodge Bootery. Since it was after the war they had to wait until they were able to get shoes, so in the meantime they operated the Cosy Lunch. Leonard’s Brother Harold joined the team and small-town history was being made.

In early 1970’s Leonard Hodge’s son Dan and wife Susan bought Hodge Bootery. The expansion started with buying the Gambles hardware store next door and blowing out the walls between. The largest western store in the five-state area had over 1000 pair of cowboy boots on display. The family business included son Brad opening a cobbler shop in the back. Youngest son Lee even helped after school and summers with trying his hand at salesman and head shoe shiner.

There was a lot of competition in town for western wear with the Hitchin’ Post, Western Way, and the C bar J. The Hodge’s bought the C bar J from the Brooker Family and moved the name and products to the bootery. With the new Interstate I-90 paving the way to the new Rushmore Mall in Rapid city, the decline in available customers started. The droughts in the area were the final straw. In the early 1980’s Hodge Bootery closed its doors but not to be forgotten.

When the Hitchin’ Post moved into the Hodge Bootery, Pete purchased the Flat Iron building and his retail ownership began. The Hitchin’ Post closed in 1984 which allowed Pete and Alberta to devote all their efforts toward Pete’s Clothing 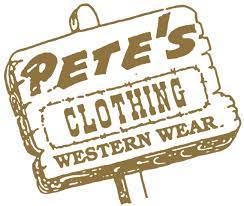